What has Coke La Rock been up to? 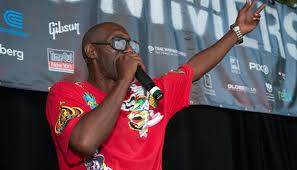 New York native Coke La Rock is one of the golden era’s greats, not only because of his rap skills but because he was the trailblazer of the art form. Partnered with DJ Kool Herc, he went down in hip-hop history as the first to ever do it.

Growing up in the Bronx, it would have been easy for La Rock to quickly spiral down into the world of drugs and gang violence, but he always worked hard to be different and rise above. In a DJ Vlad interview, La Rock talked about how, in his youth, he wouldn’t deal with people on drugs, thanks to his track coach and his mother, who was raising him on his own.

Coke La Rock, also a DJ, was friends with the legendary DJ Kool Herc before he knew he was performing at parties. In 1973, Coke decided to join forces with Herc and perform with him at a party hosted by Herc’s sister Cindy. It was at this event that Coke became the originator of Hip Hop.

According to an interview with Wax Poetics:  “Man, when I first started, I didn’t know anything about rapping. I just got on the mic playing around. I was a quiet guy, but when the music started playing, it just brought out another person. The talking just came out of me.”

Fun Fact: Before he became Coke La Rock, his name was “A-1 Coke” and “Nasty Coke” before setting on his current name after it came to him in a dream.

Coke La Rock is actually the originator of phrases like, “Hotel, motel, you don’t tell, we won’t tell.” and “You rock, and you don’t stop.” His rhymes were always improvised/freestyled, and he admitted that his rhymes started out as a way to boast, hustle, and impress girls.

Coke La Rock and DJ Herc kept the momentum and used this setup at future parties. Their popularity and success continued until 1977 when Herc was stabbed at a party. Coke wanted vengeance and decided to try to find the person who stabbed Herc, but discovered that the person’s friends had moved him out of the state to escape trouble. Although Coke did not get vengeance, he realized it was time for him to step away from hip-hop and avoid this violence. His son had also been born, and we wanted to make sure he was more present in his life.

Legend Without An Album

Coke La Rock was a huge success on the party scene in the Bronx, but he never released a record of his own. Outside of that, the only recordings he did were personal tapes he would make for friends and local DJs as shoutouts. Currently, there are two records where his work can be hurt – the song “Hello – Merry Christmas Baby!” and “Rolling 110 Deep,” a record from DJ Kay Slay.

Becoming a famous artist was never his ultimate goal, as revealed in the Wax poets interview: “Getting into the music business wasn’t my dream. I remember Big Hank from Sugarhill telling me to come talk to Sylvia [Robinson], but I stayed away from all that. You know, look how a lot of them got bamboozled. She was paying them little money, but she was making that world money.”

Where Is Coke La Rock Now?

Coke La Rock is still a living legend and has been found performing and giving interviews about his legacy and hip hop throughout the years. He’s also a proud grandfather now!

Where To Find Coke La Rock

CHECK OUT WHAT’S GOING ON WITH SLICK RICK HERE

Previous articleIllitant | Mentoring & Music
Next articleJermiside and the Electric Boogie