New York hip-hop pioneers Salt-N-Pepa came together to take the world by storm with their bold, confident, and unapologetic rhymes. Their hard work and tenacity led them to become one of the most successful and highest-selling rap acts of all time and earned them the title “The First Ladies of Rap and Hip Hop.”

Salt-N-Pepa members Cheryl James and Sandra Denton originally came together when working towards their nursing degrees. The two became friends and started working together at Sears with Cheryl’s boyfriend, Hurby “Luv Bug” Azor.

Hurby was studying music production and asked the ladies to help him record a song for his class project. This assignment was the song “The Showstopper,” which was intended to be a response record to Doug E. Fresh’s “The Show.” Hurby decided to give the song to his friend Marley Marl, who included the song in his set. The song became so popular that a label reached out to release the song officially, and it wound up reaching number 46 on the US Billboard R&B chart.

Going From Two To Three

After the success of “The Showstopper,” Hurby, who was now working as the group’s manager and producer, and the ladies decided that it would be a good idea to go full-time into music. By 1985, the group signed to Next Plateau Records and released the song “I’ll Take Your Man.” Cheryl and Sandra were so invested that they decided to drop out of nursing school.

Despite the success of the album, Salt and Latoya could not get along, leading Latoya to leave the group. That next year, Deidra Roper was brought into the group as the new Spinderella.

The group didn’t stop their momentum, releasing their second album, A Salt with a Deadly Pepa, in 1988. This album contained songs like “Shake Your Thang” and “Get Up Everybody (Get Up).”This album hit number 38 on the US Billboard 200 chart and number 8 on the US Top R&B/Hip-Hop Albums chart. This project also went on to go gold.

1990 saw the release of their third album, Blacks’ Magic. This album included songs like “Expression” and “Let’s Talk About Sex.” The album reached number 15 on the US Top R&B/Hip-Hop Albums chart and went platinum today.

Their fourth album, Very Necessary, came out in 1993, this time on London Records. This song included hits like “Whatta Man,” “Shoop,” and “None of Your Business.” This album proved to be a huge success, reaching number 4 on the US Billboard 200 chart and going 5X platinum. The success of this album earned them the title of the first female rap act to have a multi-platinum-certified album. They also won a Grammy in 1995 for Best Rap Performance by a Duo or Group thanks to this album – they made history a second time as the first female rap act to win a Grammy.

After the success of their previous album, Salt-N-Pepa decided to cut ties with Hurby Azor, who they accused of unfairly distributing royalty payments. He and Salt had also broken up at this time. After this situation, the group released an album called Brand New in 1997. This album had songs like “Gitty Up” and “R U Ready.” This album hit number 16 on the US Top R&B/Hip-Hop Albums and went gold. However, the album could have potentially done better, but due to their new record label going bankrupt and not getting as much marketing and promotional support, the label could not give it the push it could have.

After that album, The Best of Salt-N-Pepa was released in 2000. At this point, Salt decided that she was tired of the music industry and wanted to quit, eventually leading to the group’s breakup in 2002.

After five years apart, Salt-N-Pepa came together to appear on the 2005 VH1 Hip Hop Honors, and the complete trio reunited at the 2006 awards ceremony of the same name to perform.

Fun Fact: The 2006 Hip Hop Honors not only saw the first performance the trio had done of “Whatta Man” with En Vogue on stage ever! 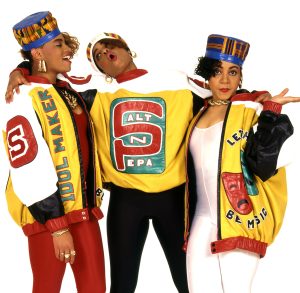 In 2007, VH1 featured the women on their reality show, The Salt-N-Pepa Show, which lasted two seasons.

The group continued to perform and tour together up until 2019 when Spinderella announced that she had been fired from the group. This same year it was announced that Lifetime would be releasing a biographical miniseries about the history and journey of the group.

This song is an excellent representation of how Salt-N-Pepa is all about empowering women and helping them take back their pride. Not to mention that it’s catchy!

I couldn’t end this article without highlighting “Shoop!” Another song oozing with feminine confidence and power, it’s confident, catchy, and a classic!

Where Is Salt-N-Pepa Now?

Although the original trio is no longer together, Salt-N-Pepa continue to tour, make appearances, perform, and remind us why the world first fell in love with them. Pepa can be seen on the reality show, Growing Up Hip-Hop alongside her daughter and ex-husband Treach from Naughty By Nature. DJ Cocoa Chanelle is now Salt-N-Pepa’s Spinderella.

Spinderella also continues to perform. And let’s be honest – she will always be our one and only beloved Spinderella!

In November 2022, Salt-N-Pepa recieved a star on the Hollywood Walk of Fame. DJ Spinderella was also a part of the induction ceremony.

Outside of their careers, all three women are now mothers and love their families. Let’s hope the trio can one day put their differences aside and come back together again!

Where To Find Salt-N-Pepa

WANT TO KNOW WHAT’S UP WITH RAH DIGGA? CHECK HER OUT NOW!