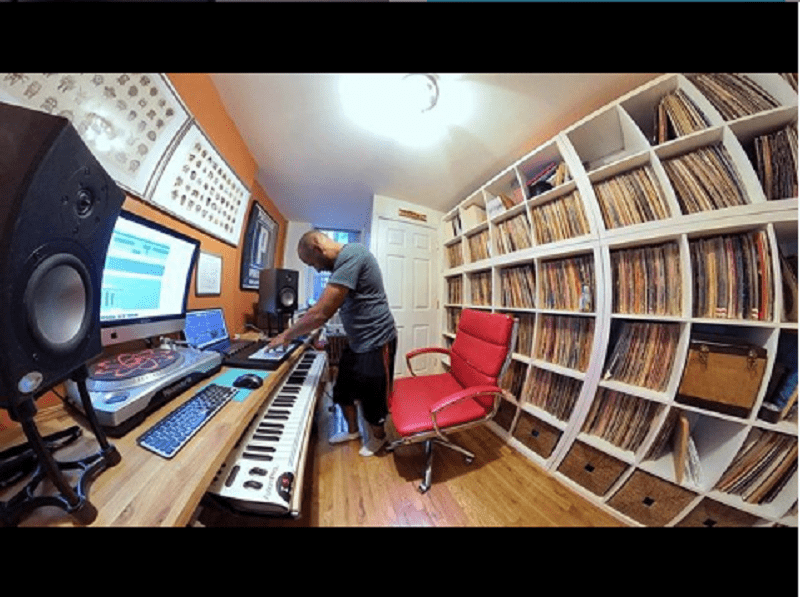 Hey guys what’s up? Tonight i have a treat for the beat seekers. Our featured Producer is Cryptic One of the Atoms family crew. When I first became aware of Cryptic One, I had only heard his instrumental tracks without lyrics. I have since discovered his old stuff (I see you!) and I am vibing to some excellence right now!

Cryptic One lives basically at Ground Zero for the Coronavirus in Brooklyn, NY. While he acknowledges it being the epi-center of doom, he still says he loves living there. That’s love.

He has been doing this a long time. Since pause tapes… ya I don’t think most of you are going to know what the hell that means. Let my old ass explain. Back in the day, we used to have two stereos (or Boom boxes) and cassette tapes. They didn’t necessarily have to be blank. If you were tired of a tape, or it sucked… you could rig it so that it could be recorded over.
So, we would literally sit with these two stereos and play one tape (or the radio) and record in onto another tape in order to make a mix tape with music that we wanted to listen to later. Because, life sucked and we didn’t have streaming music. We had to improvise.

After the sad days of pause tape technology, Cryptic One graduated to “real equipment” and released “Beyond human comprehension” on his own label. Since then, he spent over a decade rapping and touring, then got burnt out on the business end of music (which is a sad reality that a lot of Indie rappers have to live with) and took a five year hiatus.

Now that he’s back, he focuses on making music that he enjoys making. He says that financial gain is great as well, but it’s not his main concern anymore. He wants to enjoy music and pass on the art of making music that you just fucking enjoy making! He’s happy to sit in the studio and make music without a paycheck. Few people understand this concept. That’s how I am about the blog and the podcast. I do it because I fucking enjoy it. The appreciation is enough. For Cryptic One, the appreciation is enough.

Cryptic One – The beats

I have been very happily chilling in my room, listening to Cryptic Ones old albums on my headphones, bong at my side – thinking about how I WILL exist in the same plane even at the end of my life. Because 1. I just smoked… 2. I listened to the song below like ten times and 3. It’s like mid-life crisisish time for me. So the song was right up my alley.

Wait! This dude has a track with Aesop Rock… hold up! Ok, I should have listened to his entire catalog before I started this article but, it’s HUGE and I have been listening for quite some time now – and I’m still discovering more and more awesomeness. So, dude has a track with Aesop Rock, his instrumentals are off the hook and he raps on point. And he let ME interview him. This gig is getting pretty good man.

Now, like I said earlier, when I discovered Cryptic One, I had only been turned on to his instrumental tracks. These tracks, although they don’t have lyrics, are still dope as fuck. I’ll tell you why. Each track tells a different story. You can envision the story as you listen to them. Tonight on Crystallized Beats Podcast, we are listening to “Cynical bastards” which is a track that I chose because it literally sounds like at any moment, Nas or like U-God are going to break in with some slick lyrics. So definitely want to check that out HERE.

I haven’t done this before, but I am literally going to record a new episode tonight and feature several songs by this man. I’m that hooked! So, look out for that Probably around 8pm Est. CHECK IT OUT HERE

The 2nd project is a continuation of my Beataday project.  I have done 3 seasons of beataday and the basic premise is i make a beat & video every day for 100 days straight and share them daily on social media.  Last time I did it was in 2017 and this current quarantine has me thinking of starting it up again.  Its a big commitment because it takes a lot of time so I haven’t yet committed to a start date.  But we will see… you can check my IG under the hashtag #beatadays3 for a taste of what it was like the last time i did it”