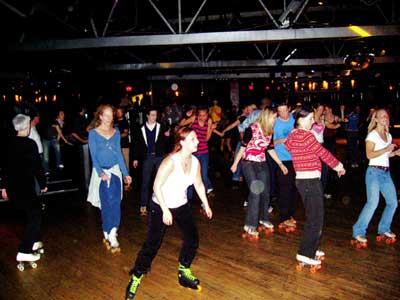 As I lie down on the bed, zipping up my Palazzo’s, I thought “This gig is going to be so far out!”. I was running late. We were all supposed to meet at this new joint called the Roxy on West 18th in Chelsea. It was this hip new roller rink and I was super psyched!

My friend Jen was waiting in my room. She didn’t bother to rush me. She was just as busy getting herself ready, we had to be PERFECT! Downstairs in the driveway, Max and James were waiting for us in the T-bird. This night was going to be epic.

We got to the Roxy and the line was already all the way down the street. We didn’t have to wait. Max was the new DJ at the Roxy and he got us right in, no sweat. Now THAT was what we called taking it to the max! Max always had the hook up to the best places in town.

The Roxy was no disappointment. The joint was so fab and we got down all night. That was the beginning of something special.

The Roxy was hype! It was where all the cool motherfuckers were. Max was always spinning crazy new records. The guys from the Bronx were aces baby. They would gather in a circle and break out the sickest moves. They called it “breakdancing”.

We were all still into Disco mostly, but these guys were just so mesmerizing and the music that they brought with them was bitch’n! It didn’t take long for breakdancing to catch on. Not at all. Pretty soon, even I was attempting it. I never got it right, but man did I love to watch those guys get down!

Those were the days. For sure! The booze was flowing, the China was white as snow and the parties were never-ending. As the 70’s turned into the 80’s, the Roxy went from a jive roller rink to a full blown night club. The party was just beginning…

CHECK OUT THE REST OF THE SERIES HERE