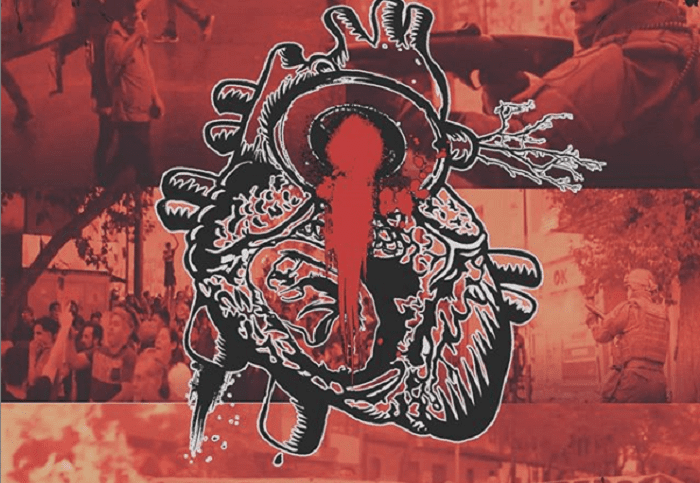 Hello and welcome to our first Hardcore Friday feature! And how fitting that it landed on Friday the 13th! I have decided, that as much as I love Hip hop, we need a little variety around here. And I have always had a sweet spot in my heart for a good Hardcore band.

I grew up hanging around the guys. I was always very close with my younger brother and I hung out with him and his best friend for years. They were really into old school punk, but they also got me into Hardcore.

My favorite Hardcore band (and a lot of people are going to roll their eyes on this one) is Dillinger Escape Plan. There is something about the mix of vocals, the guitar and the horns (even though they are a back ground track) that I really dig.

So now you know where this Hardcore feature idea came from. Let’s get to the music! The first band to be featured on our Friday night Hardcore Feature is Vida Hostil (Hostile Life) from Santiago De Chile, South America.

I was VERY picky about our first band. I only approached two bands (both from South America… go figure) out of the hundred or so that I checked out. But, I was REALLY hoping that these guys would get back to me. After a nail biting six hours, I received a message back on Instagram that they were in!

The members of Vida Hostil are: Pablo Artés on the drums (also drummer of Thvnvtos), Javier Pérez on the rhythm guitar, Darío Llancamán on the lead guitar (also guitarist in Bajo El Exilio), Enzo Ramírez on bass, and Felipe Venegas (a.k.a. Hostil Ronin) on the mic (also frontman in Vertebra and Si Vis Pacem). And I thought I was busy! These guys are dedicated to the music for sure!

Al Servicio de Quien is the first song I heard by the band and I was like YUP!

Growing up in a part of Boston with a Puerto Rican dad, the Spanish girls accepted me as one of their own (even though I am the whitest Puerto Rican chick you will ever meet) and I am able to understand a lot of Spanish. So, this was easier on me than last night’s Russian feature.

This band thrashes! Their lead guitarist is a madman and the drummer is amazing! The singer again, incredible! All around, they just kick SO MUCH ASS! Don’t you take my word for it! Check this out.

Before I spoke with them, I had picked up on a few things. For one, they remind me of Suicidal Tendencies, but they also remind me of Rage Against the Machine and a lot of their songs do have a political message. But really, they’re unlike either. It’s a bit hard to describe. But, after talking to them and finding out their influences, it made more sense to me. As they listed both bands among MANY influences.

I decided to just include this whole answer from them because it is poignant and I didn’t want to paraphrase. I asked them about their political stance and lyrics:

A message from Vida Hostil

“As a band we have a special concern in political issues, and our approach consists in a very strict analysis of elements in national, international and transnational contingency.
The lyrical inspiration considers history, politics, philosophy, economics, inequality, corruption, indigenous rights, human rights violations, climate change, abuse of power, popular organization, injustice, ​violence and lots of other subjects.
We consider addressing this content in music as a priority need. Although there are several oppositional exponents who systematically denounce the injustices of the system, we refer to the neoliberal capitalist model in Chile and its consequences for our people, our nature and our future as humanity.
We feel responsible to refer to this content in our songs, in our music, considering our historical root of imperialist violence, dictatorships and corrupt political-business governments.”

That’s some heavy shit.
Check these guys out! Even if you’re a Hip hop head, they have a rap vibe in a lot of their music. Give them a try, you might find you have a spot in your heart for Hardcore too!

AND AS A BONUS… I WILL BE FEATURING AL SERVICIO DE QUIEN TONIGHT ON THE CRYSTALLIZED BEATS PODCAST. WHICH WILL BE AVAILABLE IN ABOUT IDK HALF AN HOUR OR SO…. SO WATCH @NEVERNAIRE INSTAGRAM FOR THAT PROMO AFTER THIS ONE!