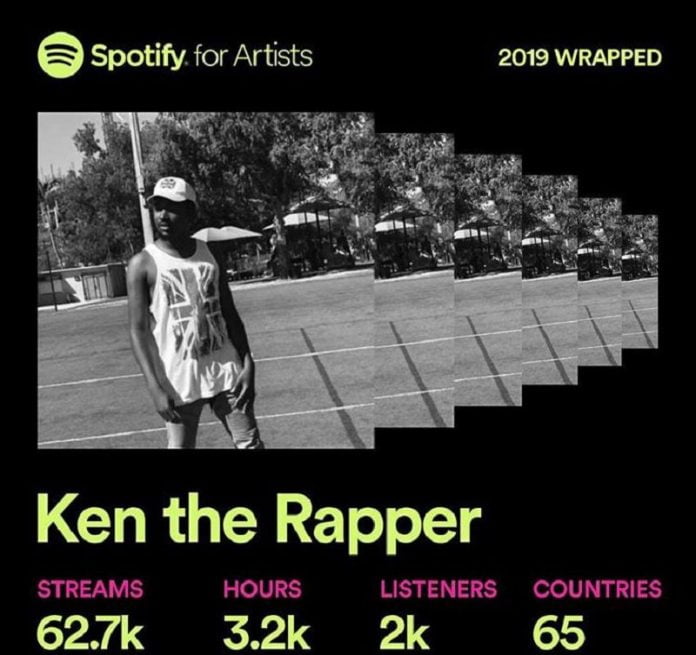 What’s up guys? Tonight’s featured artist is Ken the Rapper. I found Ken’s music by accident. I was writing an article about JK1 the Supernova and he worked with Ken the Rapper on his album “The Divine Hand”.

I wrote up the article with a small section about each artist that was on that album. APPARENTLY, I sometimes put together articles and podcast episodes for people that don’t even READ them! Because, this Ken the Rapper did NOT work on that album, and no one corrected me…. So, I’m guessing he didn’t see it.

I continued listening to Ken the Rapper after I wrapped up the JK1 project. I was high af one night listening to his Spotify and I thought “This guy would be a great interview for the podcast”. So, I found his Instagram and hit him up. That’s how I found out that I had featured the wrong artist in the JK1 article. Kind of embarrassing, but a happy accident. Because, I wouldn’t have found Ken the Rapper’s music if it hadn’t happened.

Ken often collabs with Jae Millie. I checked him out on Spotify and he’s definitely worth a shout out. Check out his Spotify below.

So, Ken doesn’t have a YouTube (YET) because he is super picky about how the music videos are going to get made. Which is respectable. I’m definitely waiting for that shit to come out though. Based on his music on Spotify, I think his videos are going ton be huge hits.

He recently released the “Problematic Bitch” mix tape which is five covers including this gem:

We listened to “Throw it back” on tonight’s episode of Crystallized Beats podcast. And, I had a chance to talk to Ken the Rapper about ongoing projects and IG Live performances. Check that out below

So, check him out on INSTAGRAM and make sure that you follow him, because there is a lot to come from this guy!